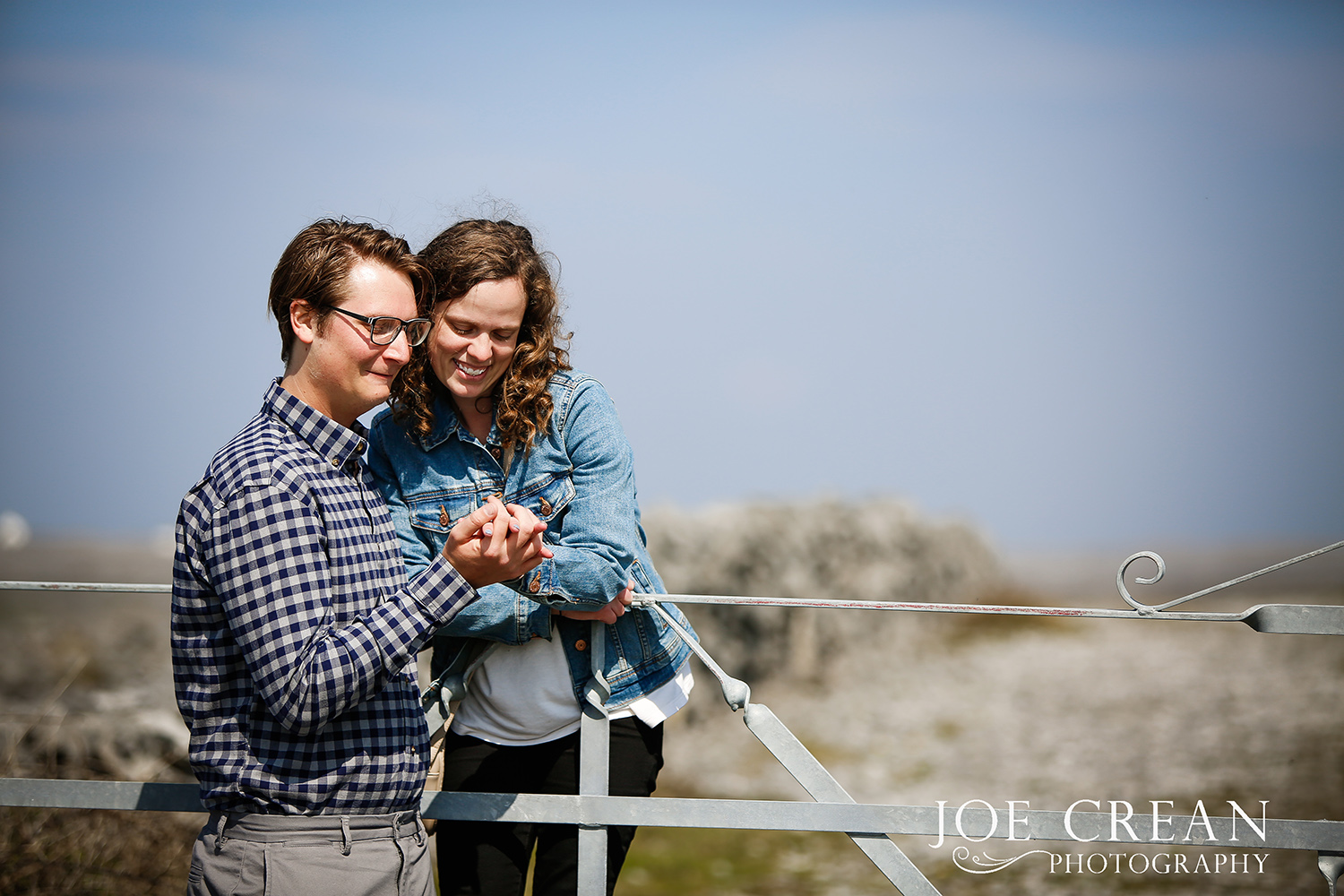 A trip to remember, a marriage proposal and, an engagement shoot on the Aran Islands. It all started with an email from Corey looking for a Galway based photographer.  Corey was based in South Carolina U.S.A.  He and his girlfriend Phoenix were taking the trip of a lifetime to Europe.  Moreover Corey  was planning on making it a trip to remember by surprising Phoenix with a marriage proposal.  His intention was to propose to Phoenix while in the west of Ireland, specifically the Aran Islands.  He was looking for a photographer to capture their engagement shoot, and obviously this all needed to be done in a discreet and unobtrusive manner.  We were delighted to be able to help him.

Between us we hatched a plan.  Understandably Corey wanted to keep Phoenix in the dark until the last minute.   The plan was to travel to the Aran Islands for the engagement shoot  by helicopter.  We were delighted to have been recommended by  Executive Helicopters. Myself and Ann Marie were to pick up the  helicopter locally and meet up with Corey & Phoenix at Dromoland Castle where they were staying.  We met with Billy our pilot who was in on the secret.  We were posing as tourists sightseeing for the day and sharing the ride.  All went well, Phoenix didn’t suspect anything.

As part of the flight, Billy the pilot took us over the majestic Cliffs of Moher on our route to the Aran Islands, what breathtaking views we had.  The weather was perfect and as a result of such clear skies the sights were amazing. Immediately after landing on the Islands we parted company.   We needed to be at the designated beauty spot before them in order to be set up and ready for the engagement shoot. We were met by the local minibus driver who was in on the secret of the impending marriage proposal.  He was to drop us near the designated spot, meanwhile we had organised  a more romantic trip by pony and trap for Corey & Phoenix.

The designated spot for the engagement shoot was The Black Fort.  A most spectacular location for a proposal.  Upon our arrival we selected what we felt was the most appropriate spot for a marriage proposal. One that would enable us to capture it from a distance. While taking into account the breathtaking view of the Atlantic Ocean.  It was equally important to have a good vantage point to capture the proposal.  From a photographers point of view the weather was just perfect. The sky was blue. The sea was the most fantastic shades of green and aquamarine, with frothy waves crashing against the cliffs.   We positioned ourselves on the cliff top, opposite each other.  Corey knew from our planning that he was to stop between us and we would then be able to capture the moment of their engagement from both sides.

We didn’t have long to wait.  Soon Corey was strolling hand in hand with Phoenix along the cliff edge.  Obviously we kept our distance.  Pretending to be admiring the view, but in fact we were keeping a close eye on them both. Consequently, Corey picked his spot between both of us.  Next to a small outcrop of rock which acted as a seat.  We kept clicking away.   Our cue was when they would stop walking.  Initially they stood and gazed out at the ocean.  I think Corey was plucking up the courage!  Eventually  he dropped to one knee and popped the question.  Click click click, immediately our cameras were focused on them.  Hurray! we knew immediately by Phoenix reaction that the answer was YES !

It was the perfect proposal and the perfect moment.  Phoenix never suspected a thing.  Understandably she was overcome with emotion.  I must admit I almost had a tear in my own eye.  We congratulated the newly engaged couple and continued to take some more  photos for them.

We spent the remainder of the day with them, touring around the island, capturing memories of their engagement. What a lovely couple. All too soon the day had come to an end.  We climbed aboard the helicopter once more for the trip home.  Having dropped them back to Dromoland Castle, we said our goodbyes, and continued our journey home.  Feeling  honoured and privileged to have been part of your love story Corey & Phoenix.  as photographers we are absolutely delighted to have been able to capture your special moment.  We  wish you the very best of  luck on your engagement.  Most importantly we wish you a Happy Ever After.  Don’t forget we are looking  forward to an Irish wedding.