What a wonderful day for a marriage proposal on the Island of Inis Mor, where Corey popped the question to his long term girlfriend Phoenix. They were on a whistle stop tour of Europe. Corey had been  planning it for months that he was going to ask Phoenix to marry him,  while in the west of Ireland.

We had been contacted by Corey looking for a Galway based photographer,  that would capture the Marriage proposal in a discreet unobtrusive manner, after scanning a number of websites he found ours Joe Crean Photography.ie. 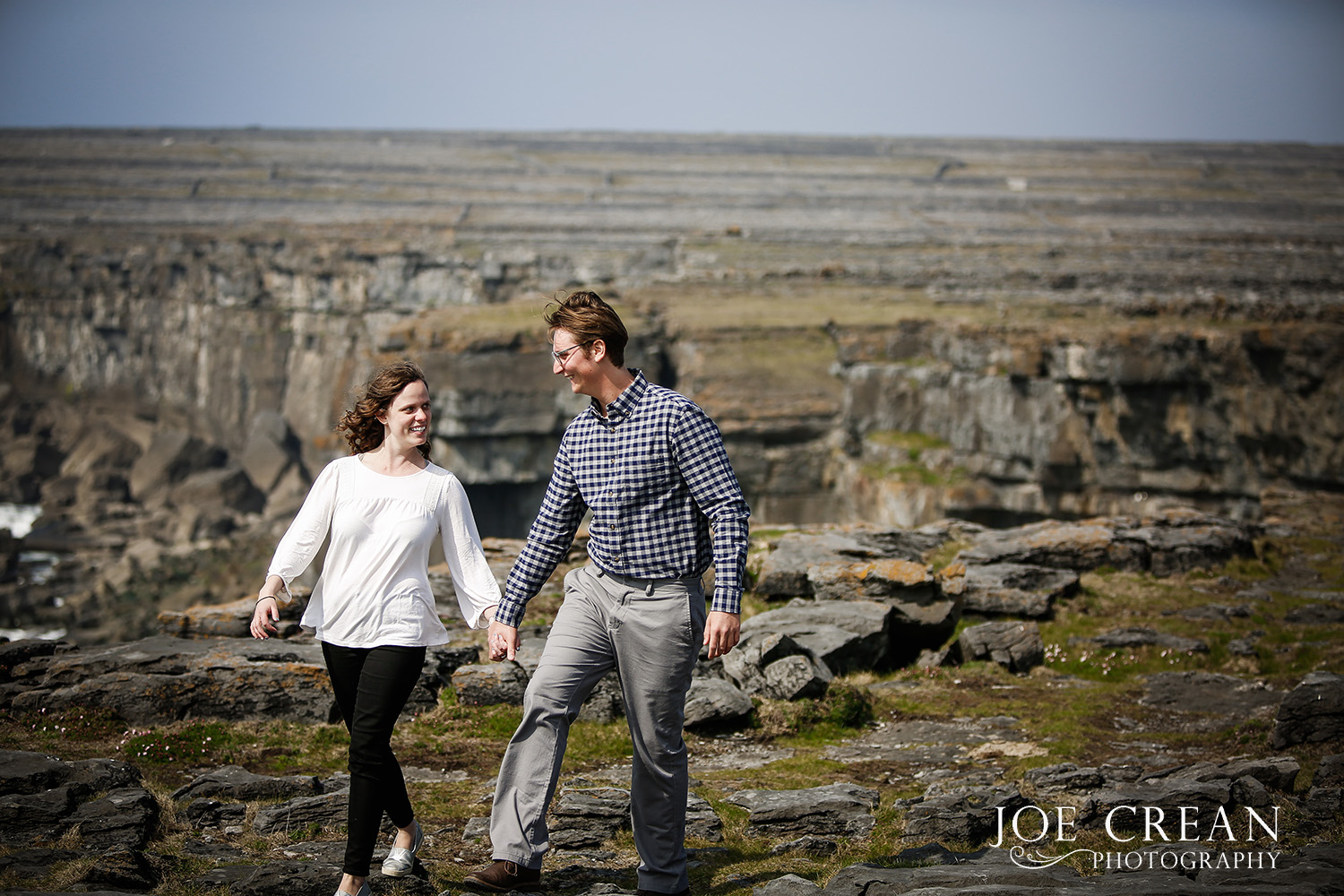 I was extremely nervous the morning of the shoot, for one we were meeting Corey and Phoenix for the first time, and secondly i had never been in a Helicopter before now,(what was i thinking when i agreed to take on this job). We were transported there by Executive Helicopters with our pilot Billy in on the secret, we were posing as tourists,  on a day out sightseeing,  sharing the flight with Corey and the unsuspecting Phoenix.

We picked them up at the Majestic Dromoland Castle and then flew on to the Aran Islands, via the stunning Cliffs of Moher. When we landed on the island after a 15 min flight, we were met by the local minibus driver who was in on the Marriage proposal.
A noticeable crowd were hanging around the tiny airport, news travels fast in a small community, word had spread there was going to be a Marriage proposal on the Island today.
Our mini bus driver had the job of transporting us to a pre-planned location namely "The Black Fort", Corey and Phoenix on the other hand were being transported in the more traditional form of transport, the horse and trap. this gave us a good head start but unfortunately the bus was able to bring us so far, no super highways on the Island, we had to walk the last few miles.

From a photographers point of view the weather was just perfect, the sky was blue, the sea was the most fantastic shades of green and aquamarine, with frothy waves crashing against the cliffs, we picked what we felt was the best spot to take advantage of the majestic scenery.

We had just sat down to have a well earned cuppa when my Wife exclaimed here they come, and sure enough there they were strolling along hand in hand toward us, as planned we kept our distance pretending to be admiring the view, but keeping one eye on them both, Corey picked his spot between both of us, we kept clicking away and on cue he dropped to one knee and popped the question, we knew immediately by Phoenix reaction that the answer was YES ! 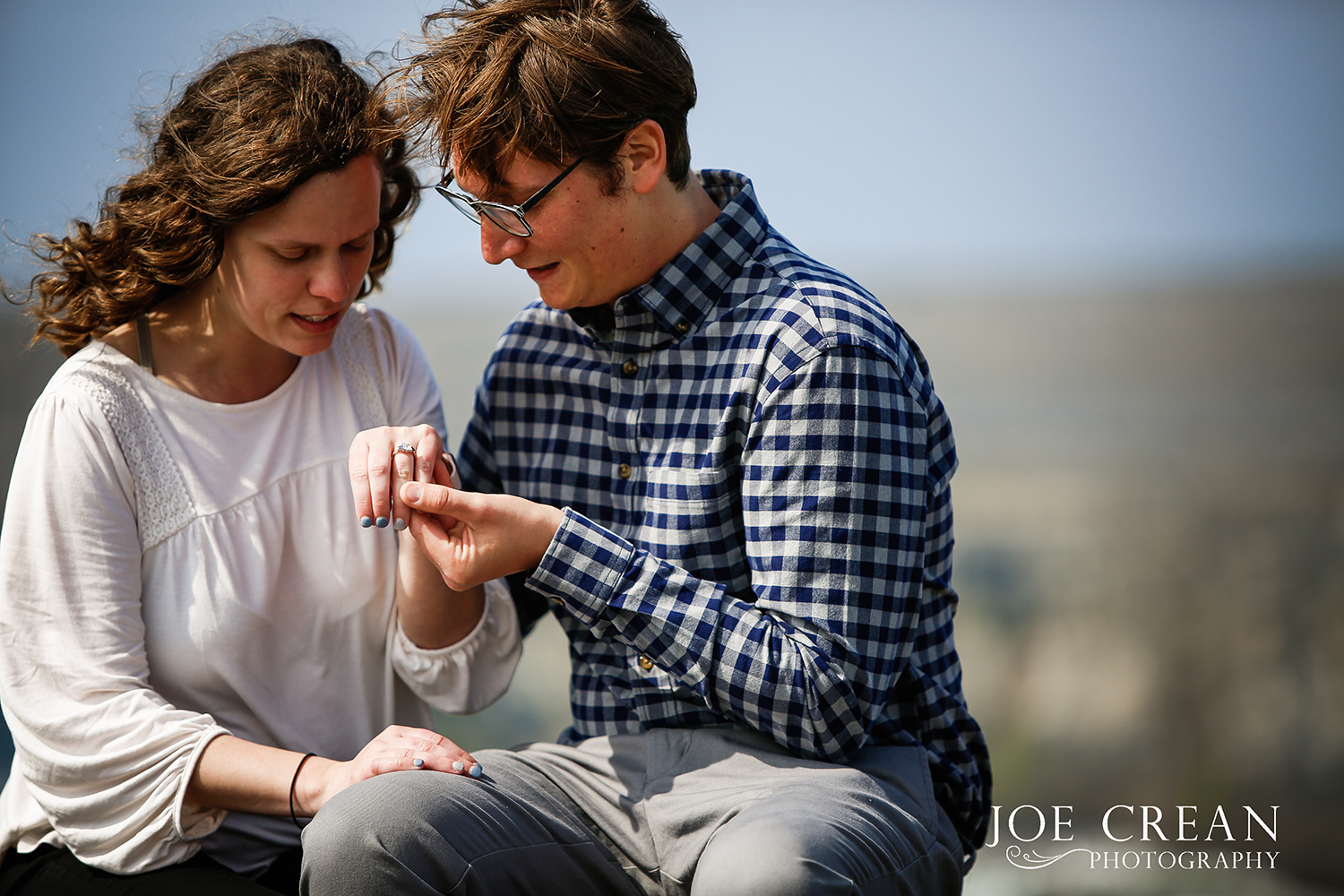 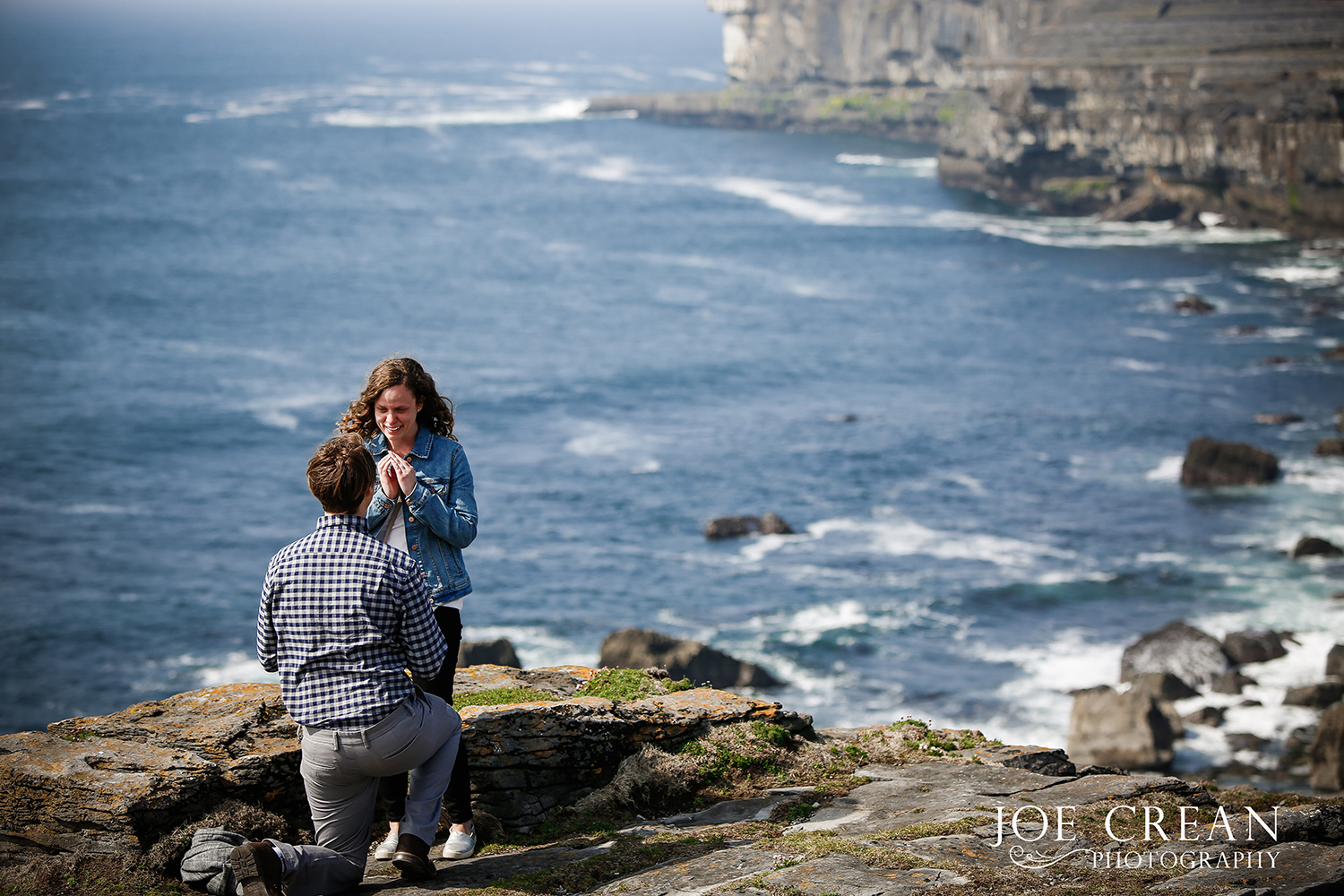 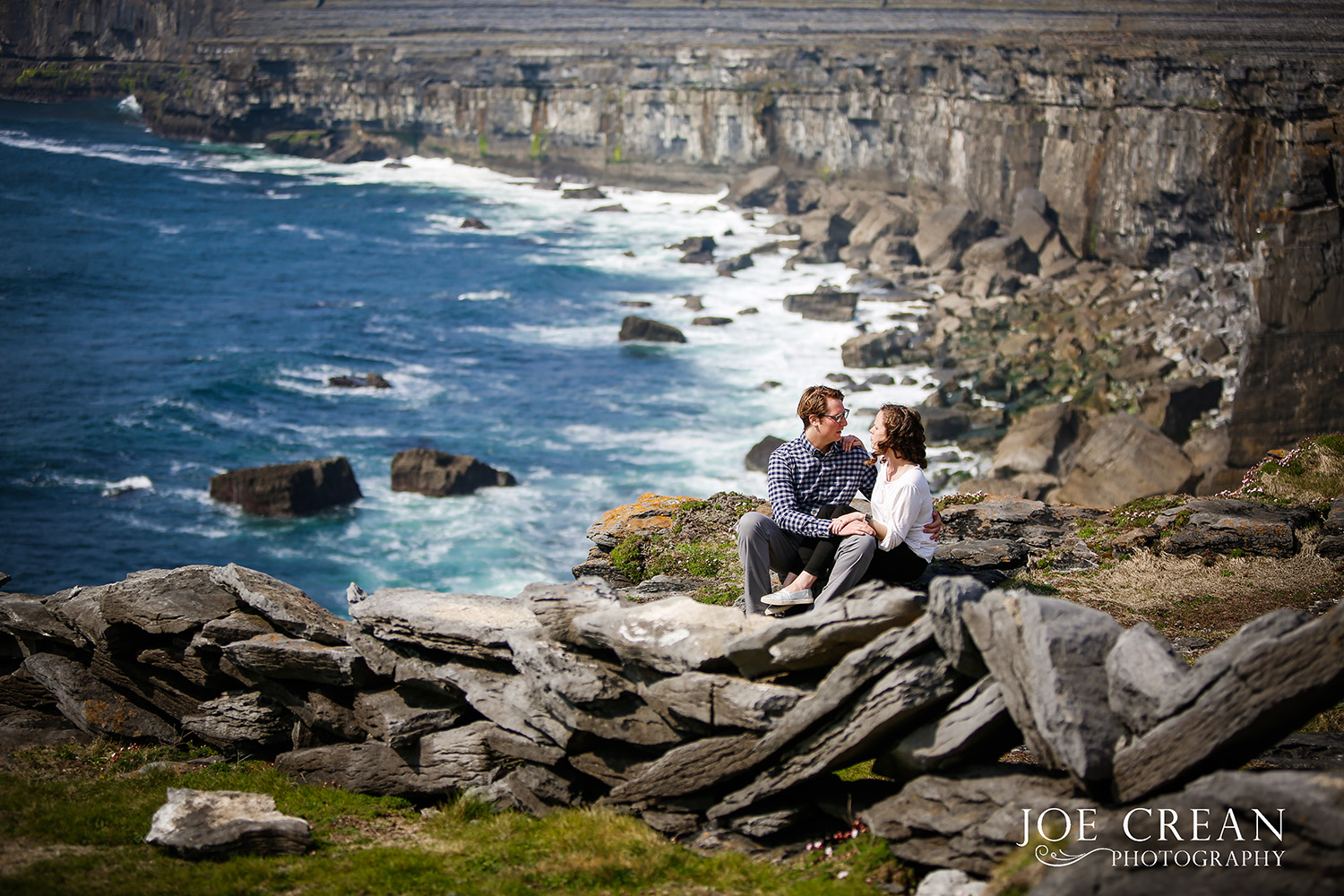 sitting on the cliff edge 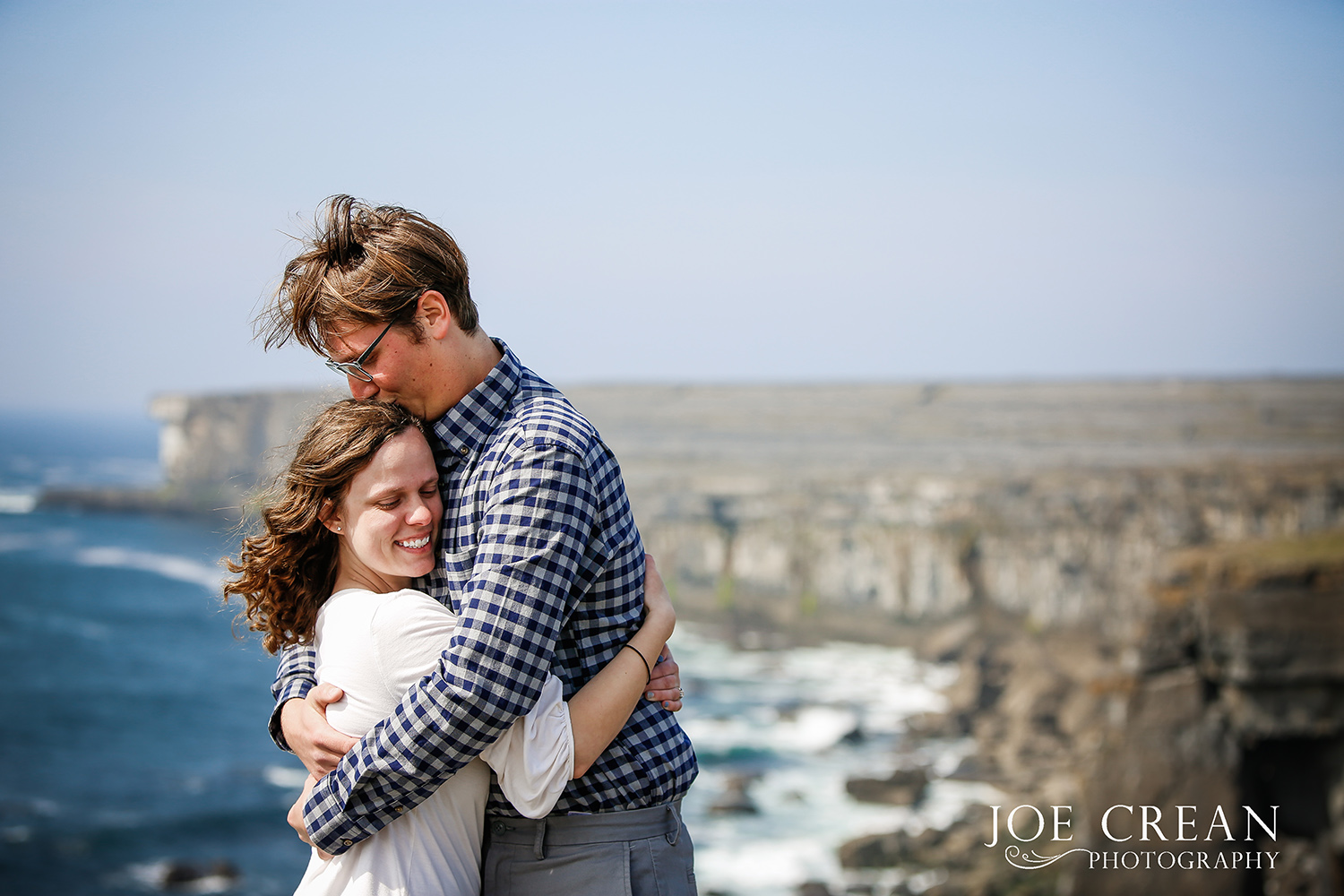 We spent the remainder of the day with them touring around the island, capturing memories of their engagement, what a lovely couple, we wish you the best of  luck on your engagement Corey & Phoenix and look forward to an Irish wedding.

View all posts by: admin